The “feeling” that I have when confronted with something beautiful, something new, or something which is not true is centered in the Pit of my Stomach. It’s a feeling we all are familiar with, that knowing of certainty, of seeing a truth, or hearing the sound of a lie . We experience this feeling in a profound way. It cannot be denied for most certainly, we would become ill with the knowing of and not acknowledging what is there in our most instant sensory organ. The Pit of our being cannot be denied.

So it is with the Baja House. The small and insignificant house is a faraway place which exists in our inner selves. We inhabit this small place with a knowing and if we shall acknowledge this inner habitat of our soul, then the knowing of Truth is ours.

The Arch of Ctesiphon, which lies to the south of Baghdad, is the world’s largest brick-built arch, and the last structure still standing from an ancient Persian imperial capital of the same name.
According to Agence Presse France, a large slab of the arch fell off last year as a result of damage caused by heavy rain.
It is located in the town of Madain, also the site of the tomb of Salman Pak, one of Prophet Mohammed’s companions. Both used to be among Iraq’s main tourist attractions before decades of unrest halted visitors to the country.
The Painting of the Khan depicts one large Blue Leaf which is the symbol in my blue flower series of Nuclear Waste and the dangers of Nuclear proliferation. This was done in 2003 and seems now prescient of what has come to pass...

Home
All Images on this site are owned by Ruth Jameson © 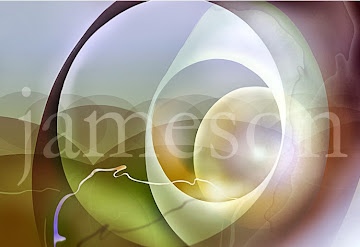 "Death of Aquifer" no. 6
Series of Original Paintings concerning the water levels of Aquifers on our Planet Earth.

Crucible no. 5
This is number five in a series of "U"Paintings. Oil on Canvas. 48" x 48"
This series was completed in 1985 and this is the only remaining image which is in my personal collection.